Thursday, December 29:  Malcolm and Sandy, intrepid fellow explorers, accompany me this morning to Wadi Tanuf, which is only about 19 km west of Nizwa. We pass by the ruins of Old Tanuf at the mouth of the wadi, but we decide to visit these after we explore the wadi.  We are driving in my GMC Terrain, which we hope will take us to the deepest reaches of the wadi. 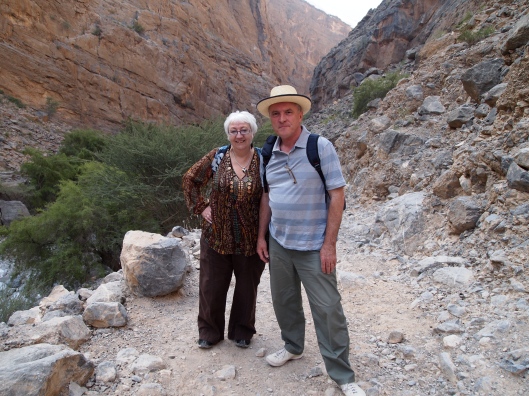 As we go further into the wadi, we pass by the recharge dam, which is dry as parchment.  This dam serves the vital purpose of filling the local wells and aquifers after rainfall.  The main purpose of this recharge dam is to slowly release water over a period of one to two weeks so that it can sink into the ground and recharge the underground reservoirs.  This helps to supply the local falaj networks through intense periods of drought and intense heat, from which Oman is known to suffer.  The main goal is to store water underground, as evaporation from above-ground reservoirs would far exceed present rainfall.  The slow release from the dam significantly increases the amount of water that is stored underground.  Water normally accumulates only 3-5 times/year behind the recharge dam and lasts about a week.  Today there is no water to be seen.   Interestingly, most of the recharge from the dam occurs downstream from the dam and not behind it.

the road into wadi tanuf

We drive 4.2 km down a dirt road to the village of Al Far, which is actually on Wadi Qashah.  It’s so beautiful, this drive, through the wadi and the sheer canyon walls on either side of us.  Apparently, this canyon, which is very narrow, sometimes is prone to flash floods. The carpark at Al Far is the end of the line, so we get out and start a walk past terraced plantations toward the village. The terraced plantations are rich with banana trees, date palms and small fields of emerald grasses and other vegetation.

As we’re walking along, we encounter a herd of about 60 long-haired goats, who seem a little peeved that we’re blocking their trail.  I don’t know why they’re irritated as it seems no strain at all for them to bypass us on the rocky ledges above.  I’m surprised how much these cute little bleating goats look like miniature humans, giving us looks like we are such bothersome creatures.  Interrupting their daily walk like this… How dare we?

the goats aren’t pleased that we’re blocking their path

We continue along the trail until we reach the little village of Al Far, which is a working and living village.  Its occupants include women in black abayas hanging out their wash to dry, a vicious little dog who barks and bares his teeth as we walk past his territory, and women carrying buckets of water on their heads.  We see a kind of earthen building that looks like a large hut of some kind and we ask one of the villagers if it is the masjid or mosque.  He says no, it’s a majlis, or a meeting room for the men in the village, a community center of sorts.

the village of Al Far in Wadi Tanuf

We try several trails to get through this village perched on the side of the wadi walls, but we can’t find a clear path through.  We decide we will turn around and take a drive back to find a picnic spot as it’s getting close to lunchtime. Some other time I will have to go back to do the hour and a half hike to the abandoned village of Ar Rahbah.  Today we are all tired so we decide we’re just not up for a long hike.

the majlis, or meeting room, in Al Far

We drive back down to the wider part of the wadi and find a large rock where we set up the picnic lunch that Malcolm and Sandy have brought: feta cheese, black olives, bread, cheese samosas, spring rolls, nectarines and orange juice.  Yummy.  As we’re standing around our big rock, some goats come over to sniff around and try to steal some of our olives.  I take a video of these little goats and try to get one to bleat for us by making some bleating noises myself.

the terraced plantations of Al Far in Wadi Tanuf

Later, I find another group of very large goats all standing, literally, on their hind legs, munching on leaves off of the trees.  It’s so weird how they stand up to eat.  Again, they remind me of oddly deformed human beings, or aliens from another planet.

After our picnic, we drive out of the wadi and make a brief stop at Old Tanuf.  This town was bombed extensively during the mid-1950s by the British RAF under the orders of Sultan Sa’id bin Taymur, father of the present-day sultan of Oman, Sultan Qaboos.  The town was bombed as a reprisal against the “Lords of the Green Mountain” (Al Jabal al Akhdar) and the dissident Beni Riyam tribe under Shaikh Suleyman. 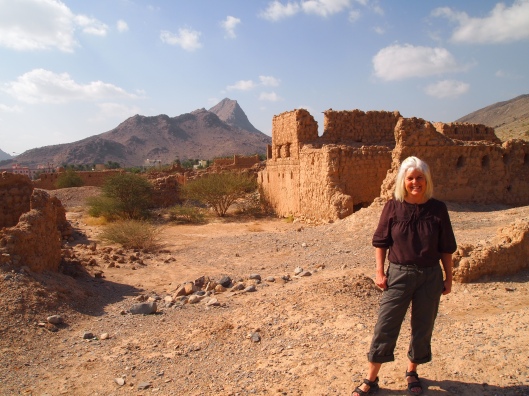 me at the bombed-out village of Old Tanuf

Old Tanuf was demolished with several 1,000-pound bombs, but the tribesmen escaped using routes through the wadi behind.  They gained temporary respite on the Sayq Plateau, but were later rooted out during the Al Jabal al Akhdar War in 1958-1959.

Malcolm and I climb about on the ruins for a bit.  It’s quite scenic really with Wadi Tanuf as the backdrop and the town’s mangled, yet proud, ruins in the foreground.

a painted door in the village of misfat

Finally, we take another drive past Al Hoota Cave and Al Hamra to Misfat al Abriyyin.  This is a charming ancient village about 5 km up the road from Al Hamra.  “Hamra” means “red” in Arabic, and as we drive up the mountain from Al Hamra to Misfat, we see the surrounding mountains and soil painted a deep rich red.  The village is set in a stunning landscape above terraced plantations of date palms. This is a sight rarely seen as date palms are usually grown on the plains and not on mountain terraces.  Ancient houses, colorfully painted metal doors and a watchtower perched on a rocky mountain complete the scene. 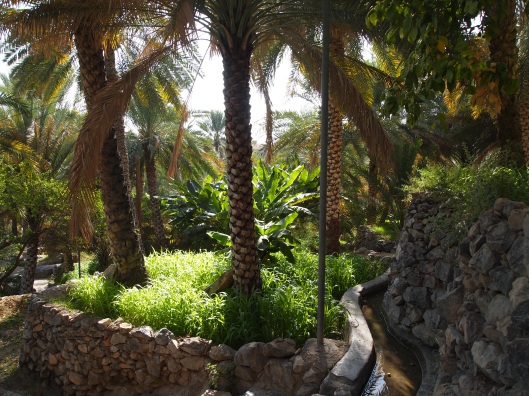 As we walk down into the village, we come to cool water running in a falaj that snakes past banana, lemon and date trees.  It’s soothing to stand in the midst of this lush greenery listening to the sound of running water.  It’s funny, I’ve only been in Oman for 3 1/2 months, but I’ve come to appreciate the rare gems of greenery and water found in the hidden wadis.  Oman is a brown and parched land, so when I come upon these little oases, I am captivated.  These spots are refreshment for the soul.

the hidden bed & breakfast in misfat

Malcolm wants to show us a bed & breakfast, Layali Shahrazad, where our friend James stayed over the National Holiday.  We finally find it hidden away among the date palms and banana trees.  We walk around the grounds, poking into the rooms and the common areas.  We come across two Omani men who run the B&B sitting on a kind of terrace.  They invite us to sit with them and have coffee and fresh dates and doughnuts.  One of the men, Ahmed Al-Abri, a peaceful and gentle man, is the owner of this place as well as a desert camp, Desert Palm Oman, in Sharqiya Sands near Al Areesh, where I stayed over the National Holiday and again with Guido.  Ahmed says his family is spread over 40 houses throughout the town of Misfat. 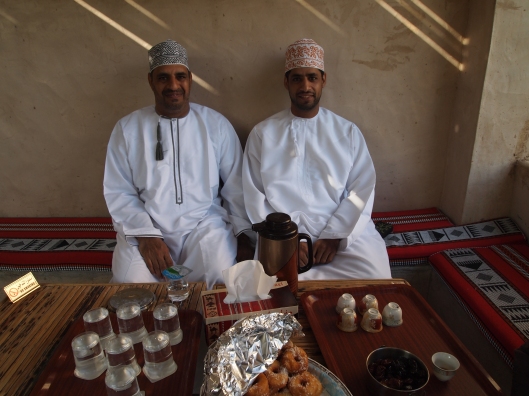 two omani men who own the bed and breakfast in misfat

Finally we climb back up through the village amidst the music of running water, until we arrive back to our car.  I was sleepy driving here but now on this warm afternoon, I am really about to drop off into the Land of Nod. We drive back to Nizwa and I retreat to my little villa to take a long-awaited nap. 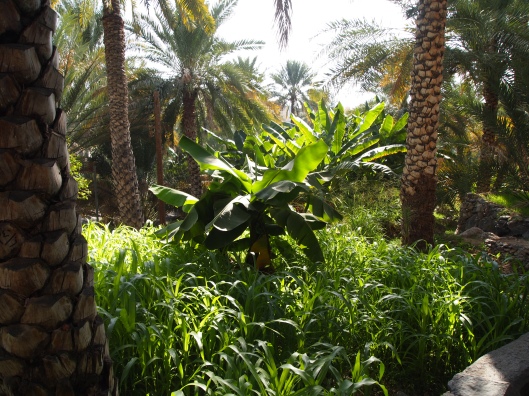