November 2011: I meander along through the curvaceous As-Siq, an impressive and breathtaking deep and narrow sandstone gorge in Petra, Jordan. It towers over me up to 80 meters.  This is apparently not really a canyon, though it looks like one.  It’s really a rock landmass that was ripped apart by tectonic forces. I see colorful rocks, bizarre-looking geological formations, agricultural terraces, and water channels cut into the cliffs (what we call falajes in Oman).  I see tombs, facades, theaters and stairways carved into the rocky cliffs. The sunlight spills like shimmery liquid into the gorge and highlights parts of the high cliff faces, artfully gilding the already painted walls.  It’s stunning.

I’m waiting for the surprise of the Treasury.  I can imagine it from pictures.  And then, around a bend, there it is, looming before me, through a sliver in the gorge, yes, there is a slice.  Al-Khazneh, the Treasury, with its Alexandrian Hellenistic columns, its unique Nabataean facade.  I feel dwarfed by its height, its immensity, and struck by its proportions, by its elaborate carvings. It was carved in the 1st century BC as a tomb of an important Nabataean King.  Some scholars believe it was later used as a temple. Locals believed, misguidedly, that an Egyptian pharaoh hid his treasure in the top urn, thus the misnomer “The Treasury.”

the Treasury in Petra, Jordan

After taking a donkey up the 800-step rock-cut staircase, I reach the Monastery. I sit at an outdoor coffee shop, sip some tea and take in the view.  After, I walk up to one of the viewpoints on a cliff top, where I can see the rock formations of Petra from above, Jebel Haroun, and even Wadi Araba.  I find an interesting rock formation through which I can see the oh-so-blue sky. 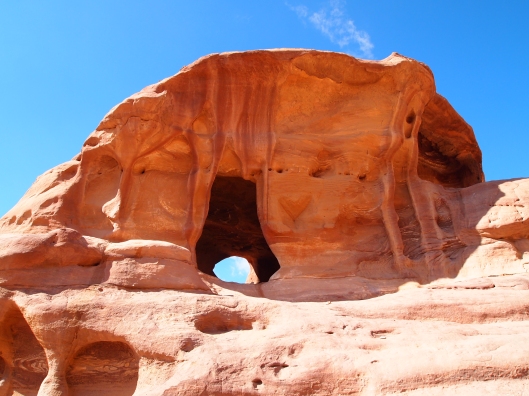 A rock formation at the top of the 800-step staircase, above the monastery. You can see the sky THROUGH it!

I come to Petra by way of the King’s Highway.  Along the way, I stop at the ancient Crusader castle of Karak (or Kerak), the setting for 12th century battles between the Crusaders and the Muslim armies of Salah-ad-Din (Saladin). Karak is only one in a long line of castles built by the Crusaders stretching from Aqaba in southern Jordan to Turkey in the north. The castle sits impressively at the top of a large cliff and the views are phenomenal, especially the golden valley below dotted with farmhouses and bushes and cloud shadows.  The castle itself is not that impressive, considering that only parts of walls are still standing, but the view is outstanding.  Here is a peek of the valley through one of the free-standing archways.

looking through an archway at Karak to the valley below

If you’d like to read about my trip to Jordan, please see a jaunt to jordan.