Thursday, December 22: This morning, Malcolm & Sandy and I venture out to explore Wadi Damm and the beehive tombs of Al-Ayn.  We have my handy book, Oman Off-Road, Guido’s gift to me before he left.  I know that we have to drive to the west of Nizwa, toward Ibri, and we’ll need to get off somewhere before that.  I’ve studied the book but the maps are confusing, and I’m hoping signs will guide us to our destination. As a back-up, in case there is no signage to be seen, I put Malcolm in charge of navigation.  He spends a great deal of time turning the book this way and that trying to make heads or tails of the necessary maps. 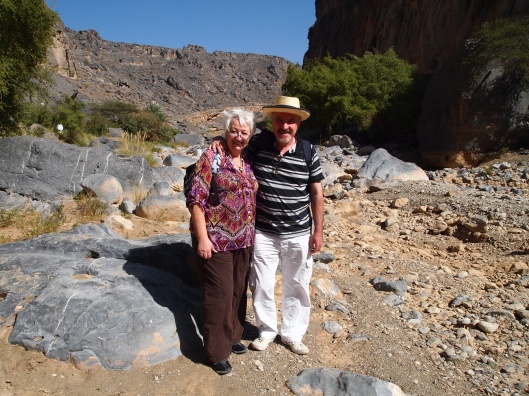 at Wadi Damm with Sandy and Malcolm

We see a sign for Wadi Damm about 87 km outside of Nizwa and make a right turn toward Al-Ayn.  We have another 35 km to go on this road.  We pass the town of Al-Ayn.  Driving along this road, we spot some beehive tombs up on the ridge of a hill, with the beautiful jagged ridges of Jebal Misht (Comb Mountain) behind.  It’s a quite impressive view.  Malcolm notes them on our way, but we figure we will stop here on the way back.  I tell Sandy and Malcolm it’s best if we explore the wadi first as I’ve had too many disappointing experiences where I’ve traveled long distances to a wadi, only to have the sun set before I can fully explore it.  We’ll make a stop at the beehive tombs on our way back. 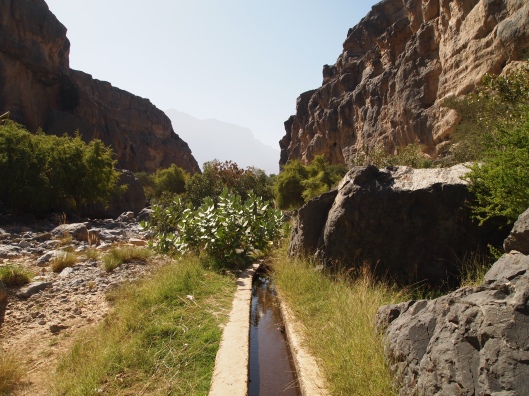 the falaj at wadi damm

We finally get to a place on the map called Barut, and we drive a half-circle at the roundabout.  We go straight and then the paved road ends.  We follow a dirt road for a short distance until we come to a dead-end.  All the guidebooks and the directions say “Stay in the wadi until you reach the rubbish bins and parking area after 1.3 km.”  There are no rubbish bins at this dead-end.  Isn’t funny how you can never find a rubbish bin when you need one? 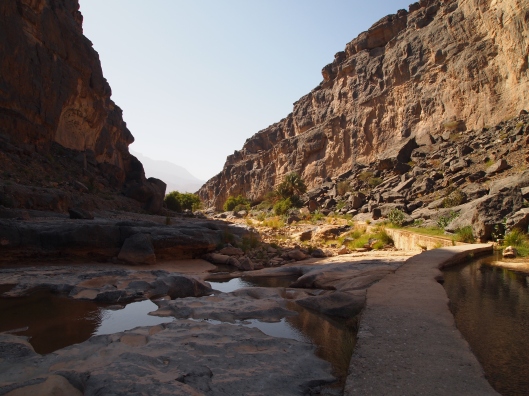 Finally, VOILA!  Malcolm figures out the map.  He’s been turning this map every which way and suddenly, it all clicks for him.  He tells us we must go back and do a U-turn near the beginning of the dirt road, and sure enough, we backtrack and find it.  We begin a bumpy ride until we reach a small village bursting with palm trees.  Shortly after that village, we drive through the wadi strewn with smooth but hefty rocks.  I’m a little worried about taking my car through this.  Then we seem to come to a dead-end again.  The wadi path to the left looks narrow and treacherously bumpy and the path to the right ends up against a wall of stone.  We decide we took a wrong turn, so we turn around and head down another dirt road on and on and on.  Our map says from the town of Damm to Wadi Damm is only 1.3 km, but we have probably gone 3-4 km.  We come to another dead-end but, much to our dismay, there are NO RUBBISH BINS to be found!! I’ve never wanted to see a rubbish bin so much in my whole life. 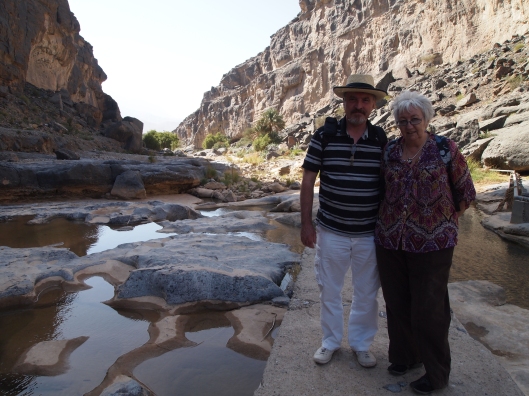 Malcolm gets out of the car to ask some Bangladeshi boy directions and what follows is a painful and fruitless conversation as the boy knows little English.  Malcolm asks the million dollar question about the village where we find ourselves: IS THIS DAMM?  The boy nods, Aywa. (Yes in Arabic).  Now we are getting somewhere.  We stop the car back at the wadi near where we originally got stuck.  I feel like Dorothy in the Wizard of Oz when she reaches an intersection in the yellow brick road.  We see a truck of Omanis coming down the road, dust billowing behind.  We wave them down.  They gesture for us to follow them and we follow them right down through the wadi, down the narrow and treacherous left fork in the path, and suddenly, there we are in a clearing and in front of us are the elusive rubbish bins we have been searching for!

Here we park the car and see the Omani guys squatting in a long horizontal cave with a low overhang.  Some of them are walking along the concrete walls of a falaj flowing with water. We try to follow them, feeling like acrobats on a tightrope.  Sandy ends up getting her feet wet because there are a couple of impassable spots; I climb over some rocks to avoid getting my feet wet.

the overhang where the omani guys hang out

At the end of the falaj, there is a large concrete wall slung between two canyon walls.  I would say it’s a dam, but it doesn’t seem to be damming anything.  We cross the “dam” and keeping to the RIGHT as I was instructed by my colleague Giles.  We walk farther up, climbing and slipping over rocks, sliding down steep inclines on our behinds,  and trying to find the path alongside the various pools and waterfalls.  Giles had told me if we came to a point where we couldn’t go any farther, we would know we had taken the wrong path.  This happens too many times to count.  We keep trying to stay to the right, but it seems the easy route is on the left.  And that isn’t even that easy. 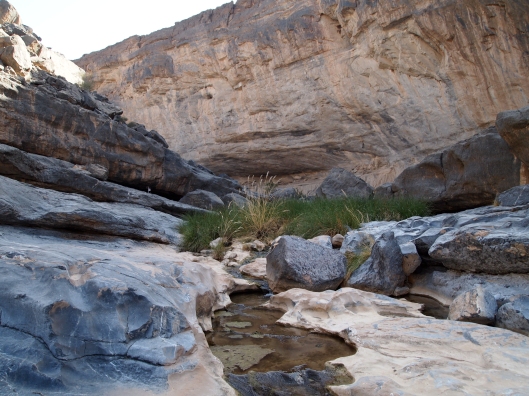 so many cool rock formations here

We decide to stop for a picnic lunch on the rocks.  Malcolm and Sandy have brought French bread, feta and gouda cheeses, vegetable & cheese samosas and spring rolls.  Malcolm pulls a carton of milk out of his backpack and says he always drinks milk when he eats.  They have so much food, I can’t even believe they carried all this on our walk.  They’re like magicians pulling rabbits out of a hat, with food, containers of food, drinks, and cups coming out of their packs.  While we eat lunch they tell me the story of how they met and I tell them the story of my marriages and about how two films, The Hours and the Italian Bread and Tulips, led me in the strange direction I have taken in my life.

the pool that we mistakenly think is our destination

After our long leisurely lunch, we clean up and head on our way.  I am still determined to find a route to the right of the pools.  Finally, as we can see no route to the right, we go as far as we can on the left until we come to a pool with a huge squarish rock balanced precariously on one corner.

We have been searching for a kind of buried treasure at Wadi Damm.  This “treasure” idea comes from a photograph in my Oman Off-Road book of this huge boulder covered in lush green grasses with a waterfall flowing through the grasses.  It is such a cool picture and we’re determined to find this place.  Or maybe I’M just determined to find it and Malcolm and Sandy are just being good sports.  We have reached a dead-end and now we have to face the fact that we’re not going to find it.  Sandy says, look at that big boulder. Imagine that boulder covered with grasses.  I think, Ahhh! This is it! 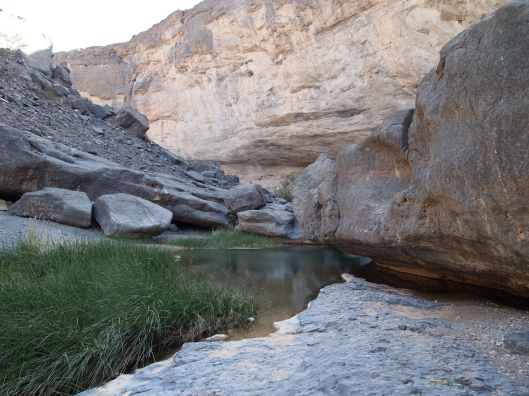 The huge boulder hangs over a pool, but there is not a shred of grass to be seen dangling over its face.  Malcolm and Sandy think that maybe in the springtime there are grasses that grow and hang over the rock.  Sandy says she showed the picture in the book to someone at the university and they told her that the place won’t look like the picture at this time of year. So.  This is it.  I can see the shape of the boulder probably is the one in the book, sans grasses.  Or maybe that’s just wishful thinking.

Later, I read my Oman Off-Road book and find that we didn’t go far enough.  “Damm” roughly translates to “hidden” in Arabic, and it turns out the place we are seeking is truly “hidden” from us.  Damn!  We should have sought a way past this apparent dead-end.  According to my book, which I should have read BEFORE I came here, “After 15 minutes you will drop down to a large pool with a huge rock perched on the far side and no apparent route beyond.” We reach exactly this point, and what do we do?  We throw our hands in the air and turn around.  This place is what we see as our end destination.

According to the book, we should “venture into the cave on your left and then pop back out to a well-worn and polished shelf with a rope dangling down.”  We should have then walked another 30-40 minutes to reach “what may be the most beautiful pool in all of Oman.”  Damn again!!  We gave up prematurely in our quest to reach this hidden gem, a little paradise on earth.

Clueless that we have totally missed what we came to see, we head back down the path we came, climbing and slipping over rocks again, back to the “dam,” and along the falaj.  I take a video as we’re walking along the falaj.

And then, unbeknownst to me, my camera is still on as we continue our walk.  Sometimes I am one of the goofiest people imaginable.

By now we are sore and our legs are tired and Sandy and I have both gotten our feet wet in the falaj.  We climb into my dust-covered GMC and begin our ride back home. 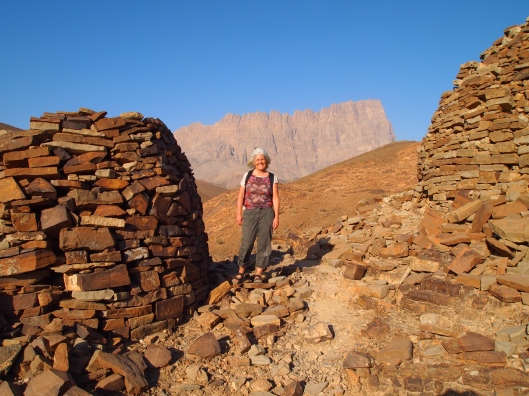 me at the beehive tombs

Near Al-Ayn, the beehive tombs beckon from the ridge in front of Jebel Misht.  We stop and pull into another wadi and hike up to the top of the hill to inspect the tombs close up.  Not much is known about these tombs except that they were constructed between 2000 and 3000 BC during the Hafit and the Umm an Nar cultures, whatever those are.  They are cool multi-layered rock tombs shaped like beehives.  They are in various states of disrepair, with the outer layers of stone lying in piles around the tombs; underneath are many more layers of stone.  The tombs almost look like solid structures and we wonder where people were buried, since there don’t seem to be empty spaces on the interiors.

While we are up on the crest of the hill in the midst of these tombs, we hear the call to prayer coming from the Al-Ayn mosque.  It’s like a call from the dead, a plea for immortality, from these ancient tombs.